The Credit Bureaus are putting a Band-Aid on medical debt.

Home » The Credit Bureaus are putting a Band-Aid on medical debt.
Previous Next

The Credit Bureaus are putting a Band-Aid on medical debt. 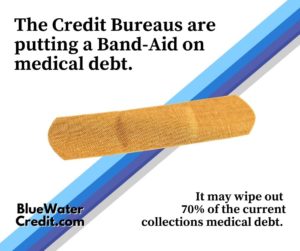 They say that health is wealth, but when it comes to medical debt and credit scores, that may be more true than you realize.

In fact, one in three American adults carrying a balance from their hospital or medical provider, and our collective total is somewhere over $1 trillion according to Forbes – and rising fast.

About 50% of Americans now carry medical debt and 58% of bills that are currently in collections (and affecting their credit scores) are medical bills, according to a recent Consumer Financial Protection Bureau report.

With hospitals and doctors charging outrageous prices with carte blanche and little accountability, medical debt is also the leading cause of bankruptcy.

But we’ve finally had a breakthrough when it comes to medical debt and your credit scores, thanks to the big three credit bureaus, Experian, Equifax, and TransUnion. On March 19th, 2022, those Big Three bureaus announced that they will remove much of the reporting about medical debt from consumers’ credit reports, ostensibly giving them a big boost.

The amendment to how medical debt is reported and impacts your credit isn’t perfect, as only about 70% of all medical debt will be stripped from credit reports according to the bureaus.

This is a big reversal for the credit bureaus and good news for a huge number of Americans, who should see the negative impact of a medical debt diminished or negated entirely. According to analysts, that will remove about 70% of negatively reporting medical debt in collection from credit reporting.

Even before Equifax, Experian, and TransUnion stepped up to make the change, the Consumer Financial Protection Bureau was considering a ban on medical debt in collections being reported to collect as a Band-Aid for the broken leg-sized problem.

According to the CFPB, medical debt on credit reports is “less predictive of future payment problems than other debt collections,” such as mortgages, auto loans, or even credit cards.

So, if you have a medical debt on your credit report, what can you expect? First off, the new changes won’t go into effect until July 2022. After that, medical debt from your original service provider won’t be on your credit report at all. However, if left unpaid and goes to collections, it will negatively impact your score, albeit with the new rules in place that we mentioned above.

According to estimates, any debt in collections can drop your credit score by up to 110 points or so, but even before this big announcement from the bureaus, they’ve looked to minimize the gravity of medical debt on your score, especially with some of the newer FICO and VantageScore algorithms.

“There seems to be an acknowledgment that medical care is essential and should not be penalized by the credit bureaus,” said Ted Rossman, senior industry analyst at Bankrate.

The biggest winners will probably be people who have medical debt in collections but already paid it off, or those with small (under $550) medical debts in collections, who could see their scores reinvigorated.

As always, if you have any questions about you credit score, collections, or even debt, feel free to contact Blue Water Credit!

Help a friend and spread the info!